The environmental impacts of transportation have always been an interesting topic and simultaneously an easier subject that individuals underestimate when greenhouse gas emissions of human activities are discussed. This article will analyze the transportation sector and how your means of transportation may affect your carbon footprint.

According to IEA and World Resources Institute, in 2018, the transportation sector produced 7 billion metric tons of carbon dioxide emissions. This is 14.2% of total emissions and is the second largest GHG contributor in the world.

With an increasing population, passenger vehicles produce 55% of global CO2 emissions. This chart compares emissions of different transport methods in 1990 and 2019. We can see that the distribution of Cars and Taxis has remained relatively unchanged. Even with more energy-efficient fuel cars, passenger vehicles are still responsible for the most emissions.

How Can We Reduce Emissions? 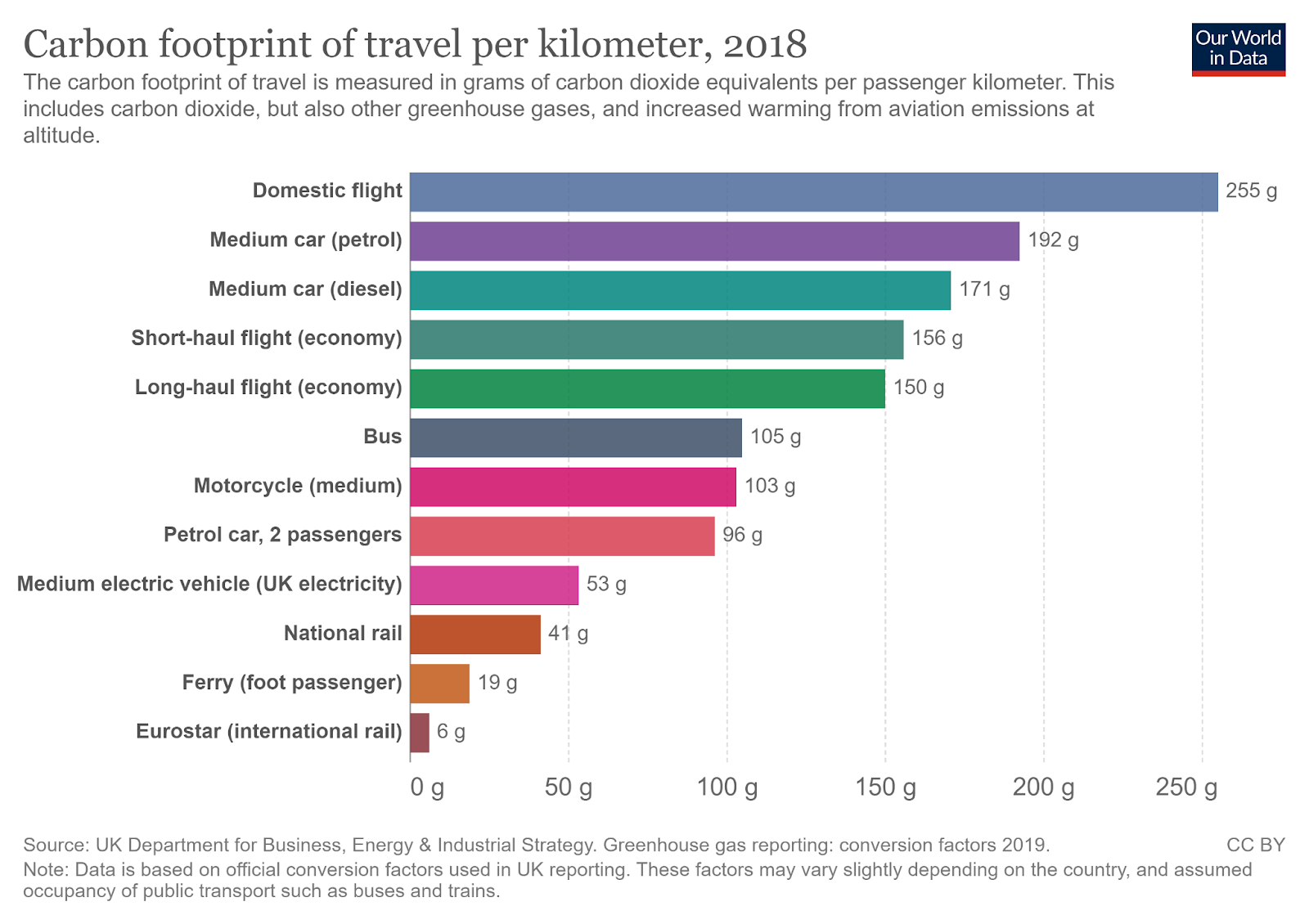 Using public transport methods such as trains and buses has always been recommended as a solution for reducing carbon emissions. Using trains and buses for domestic commutes produces almost three times fewer emissions than single-passenger cars and trains.

Public transport is often not as accessible in rural areas, so people must rely on passenger vehicles. Therefore, increasing the number of passengers by carpooling would be the next best thing as emissions will be divided among more passengers.

What about Electric Vehicles (EVs)

EVs, plug-in hybrids and hybrid cars have a much better fuel economy than gasoline cars. Hence they can be fit for solving the transportation problem. Even after including manufacturing and electricity emissions, EVs still produce less greenhouse gas emissions than regular cars.

In addition, the increasing use of renewable energy sources instead of fossil fuels to produce electricity will reduce the EVs GHG emissions even more.

Other than modes of transportation, the size of vehicles also affects their carbon dioxide emissions. For instance, in the United States, it is more common to have larger vehicles and large vehicles often consume twice the fuel and produce more GHG emissions in their lifetime.

Obviously, taking a flight has the highest impact on your carbon footprint. However, it is the fastest mean of transportation for long distances. In addition, driving alone for similar distances as domestic flights, such as driving between different states in the US or Europe, produces much more emissions. Hence, flying can be a far better option for your carbon footprint.

We understand that some emissions are unavoidable, and in many cases, there is no suitable replacement to reduce emissions. Therefore, we recommend you compensate for those emissions by carbon offsetting. At the end of the day, even small acts of sustainability are much better than taking no action at all.

We can see that the transportation sector is one of the most significant contributors to GHG emissions and a large portion of its emissions is from city cars and small vehicles. In general, opting for public transit when possible and selecting electric vehicles over fuel-powered cars will always be the best way to reduce your carbon footprint significantly.

Awareness around carbon offsets is increasing. And this climate action solution has gained some popularity among cli...
Read More
Articles

CORSIA: Re-shaping Feedstock potential for SAF with Land Use Change

In the arena of Net zero and life cycle emissions, not all biofuels are created equal. The pathways for sustainable ...
Read More
Articles

Carbon emissions from shopping have always been a topic filled with speculations and estimates to measure the enviro...
Read More
Articles

How do Your Clothes Affect Climate Change?

The connection between your closet and Climate change is not that obvious at first glance. However, according to UNE...
Read More
Articles

How Can Your Internet Habits Be More Sustainable?

In a previous blog, we talked about the effects of our diet and food production on greenhouse gases and how we can r...
Read More
Articles

How Does Your Diet Affect your Carbon Footprint?

Achieving net zero should be part of a comprehensive approach to sustainability, Which is why we believe we can all ...
Read More
Articles

In this article, Azzera’s Carbon Offset expert explains and compares the methodology and effectiveness of Carbon A...
Read More
Articles

is a pressing matter. Our team of experts at Azzera have helped many Aviation businesses to reduce and offset their ...
Read More
Articles

What is Net Zero?

Many countries and businesses have set commitments toward reaching Net Zero emissions. This is in response to increa...
Read More
Articles

Have you heard about greenwashing?

Greenwashing is when a company focuses on advertising their products and activities as being environmentally friendl...
Read More
News

What is the difference between compliance offsets and voluntary offset programs?

For those unfamiliar with the topic, the carbon offset marketplace is not the easiest system to understand. For star...
Read More
Articles

What is a sustainability strategy and why do you need one?

What are Carbon offsets?

The effects of climate change have become more evident and there have been growing calls for actions from the govern...
Read More

This is not an easy topic. We get it. Please refer to our FAQ section or get in touch if you have questions or wish to learn more. If you are a supplier or project developer in carbon removal or reduction we would also love to hear from you.